Following National Wreaths Across America Day in 2011, 11 year old Jayci Derby visited Ft. Sam Houston National Cemetery, and noticed that very few of the grave sites were adorned with a wreath.  Although Jayci's grandfather's grave always has an item meant for tribute and remembrance, Jayci was bothered that not all the "heroes," as she called them, were equally honored.  Jayci's parents explained that many of the military members laid to rest at Fort Sam Houston National Cemetery may not have family in the San Antonio area, or may have no family at all.  From that moment, Jayci was determined to change the situation.

With Jayci's Wreaths for Heroes established, I set out to raise money in hopes that someday there would be a wreath for every grave at Fort Sam Houston National Cemetery.  I am also committed to honoring those who still serve our Country.

I began applying for grants, and am proud to be one of the recipients of the Silver and Black Give Back Team-Up Challenge Championship presented at a San Antonio Silver Stars game.  This award gave me an opportunity to set-up a table at the Silver Stars game to educate people about Jayci's Wreaths for Heroes.  I proudly display the Team-Up Champion banner at local events, and am blessed to be able to enlist the help of the Silver Stars players and mascot to promote Jayci's Wreaths for Heroes.

I also started talking about Jayci's Wreaths for Heroes to anyone who would listen.  I have addressed local PTA meetings, city council meetings, large school district teacher meetings, local student bodies, Masonic lodge meetings, and have been interviewed by local TV stations.  I set-up booths at craft shows, and Walmart has supported our fund raising efforts by allowing me to set-up a table outside one of their stores.  I have also served food at local restaurants who have had fund raisers to support Jayci's Wreaths for Heroes.

I was proud to be the guest speaker at an elementary school Veteran's Day celebration where I asked the students to get involved with something they find a passion for; to help change their community.  Most importantly I emphasized that ONE CHILD CAN make a difference.

I have enlisted what I call a "youth army" to engage other young people to join me in the effort to raise funds for Jayci's Wreaths for Heroes.  I have arranged for my "youth army" and myself to wait on tables for tips and a percentage of the checks to purchase wreaths to be placed at Fort Sam Houston National Cemetery.  I am also involved with several school Student Council organization to help with our fund raising efforts.

This year, with the communities support, I was able to raise over $19,000 for Jayci's Wreaths for Heroes.  Won't you help us go over last years amount, and buy just one more wreath for $15.00 ? 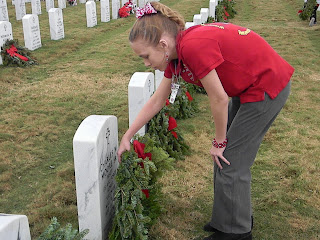 You can make a difference -- Please donate today